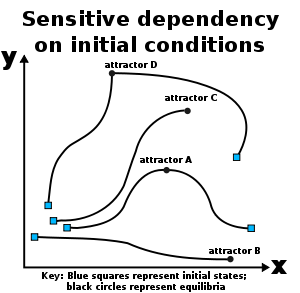 Chaos is a Greek Goddess of emptiness and confusion from which everything originates.

Addiction can be defined as habitual behavioural pattern to change emotional state, and it has characteristics such as increasing tolerance (to chaos) and the need to increase the dose (of chaos). Addiction to chaos is seen in dysfunctional social units (families and organisations).

The most common reason for this addiction is inability to tolerate uncertainty when things are going well. For those who have experienced abuse and violence, for example, peace and security are not credible as long lasting possibilities. Rather than wait for somebody to break it, the most anxious individual(s) does something to provoke dysfunctional outburst from others.


Living (working) in dysfunctional environments is like walking on egg shells, it is anxiety ridden atmosphere and the individual may feel ready to explode with tension from uncertainty and they do it by doing something that causes chaos.

There are numerous examples of addiction to chaos one can find in health and other organizations. For example, there are established ethical principles of how staff should dress for work in psychiatry (no uniforms), but politicians introduce religious dress and cause chaos and death.

When it is known who causes problems in the functioning of an organization e.g. medical regulators, people who cause chaos are employed for many years until their retirement.

Doctors and lay people sitting at Fitness to Practice hearings should be mentally fit to do so, but no checks are made health wise, no criminal records checks and one can believe in anything e.g. demons causing epilepsy, that lies are good, spacemen being our fathers, humans with wings waiting in the sky to help us and guide us and so on. This is the case in UK today.

Regulatory body such as General Medical Council has refused to place health checks, and criminal records bureau checks on Fitness to Practice Panellists although panellists are well paid and can afford to pay for those checks out of their pocket.


Checks on religious extremism are absent in medical regulatory institutions in UK. There is no compatibility checks for those doctors and lay people sitting as panellists at Fitness to Practice hearings to see if they can perform their role without religious/supernatural bias. This is the case despite the fact that there is both a hilarious and tragic element to what has been happening for decades up to present day. A doctor who is into exorcism, demons and prayer may not be practising what is known as evidence based medicine. Why bother with regulation when anything is actually OK? In my opinion, addiction to chaos is one of the elements of dysfunctionality that maintains such silly regulatory practice.

I admit, it is exciting to have demons around even if it is only imaginary. Maybe, GMC Fitness to Practice Panelists are delayed in their journey to work not by London traffic jams but demons possessing them. Yes, all the way from Charring Cross to Euston Road one was seized by hellish wonder which continued throughout the Fitness to Practice Proceedings and beyond. Maybe, coffee breaks at GMC provide the means for panellists to exchange useful information on the latest updates on demonic possession and exorcism.

What happens to doctors who may have a mole on their face or in a certain shape, would that be the sign for a bit of exorcism in the form of punishment such as warnings, sanctions on their practice, suspensions or erasure? In middle ages witch hunts one could use unusual or usual appearance of a mole to declare a person guilty of witchcraft. And some doctors are even foreign. More than GMC can cope with.

In sixteenth century England it was believed that healing was connected to witchcraft and that witches made pact with the devil. At that time, Christians thought that witches could not act alone but in groups. Thus catching one was not enough. A bit like today in UK, many whistleblowers are punished by the regulator. Healing ability is really suspect. Death is good, it frees hospital beds and decreases tax expenditure.

Bible has various parts to it including different versions and some include so called Apocrypha's (hidden) elements which allow believers to lie. So why swear on Bible that one would be telling the truth? I really do not understand that.

Another aspect of addiction to chaos is that GMC protects a whole bus load of lying expert witnesses for the simple reason that it is too embarrassing to admit that they believed them for years.

High adrenaline is said to be addictive and pleasurable to some people. This is one explanation for the resistance to order and healthy procedures.

A major attraction of chaos is that weak individual(s) gains control for a moment or two when issues are muddied/confused and before others organize themselves. Thus misinformation, lying and sheer fantasy can cause enormous problems for centuries to come. Butterfly effect in chaos theory. See illustration above.

According to chaos theory butterfly effect is that a small event can have large consequences i.e. butterfly flapping its wings can be a crucial event in a sequence of events precipitating a tornado or stopping it from occurring. A small change having a crucial effect.

Working or living in dysfunctional settings can be very dangerous to those who try to correct it. Whistle blowers are people who suffer severe punishment and expulsion for trying to right a chaotic situation, for example. There could be allegations of madness, incompetence, fraud and even criminality made against whistle blowers. The chaotic system acts to preserve itself and laws are just words on paper. If it is not what was said than false allegations are made that it is very wrong how it was said. A sparrow dressed as a wolf syndrome, I call it.

Injustice can cause social unrest and yet repeatedly human rights are abused as if there is no law to protect them. For some people, it is like sado-masochism and chaos is planned. Human beings can prepare elaborate rituals when it comes to abuse of others. Chaos is not something that is necessarily impulsive or difficult to understand. Huge amount of investment in time, money and effort is made into creation of sheer chaos.

Confusion is an interesting element of chaos. It can be a potentially useful phase in the mind of person not otherwise impaired when changing from one dysfunctional pattern to a new way of relating to oneself or others. This represents a link from chaos to creativity as expressed in the myth of Chaos Goddess from which everything is born. For example, GMC is certain that what it does to whisleblowers is correct. If they had experienced confusion in their mind about it, this would be the first step to correcting so many mistakes.
Posted by Doctors4Justice at 11:22

Email ThisBlogThis!Share to TwitterShare to FacebookShare to Pinterest
Labels: ADDICTION TO CHAOS by Dr Helen Bright