CClick on the photo to read Obama's Plan on Economic Patriotism.

Posted by Doctors4Justice at 11:54 No comments: Links to this post

BBC cover up of child abuse 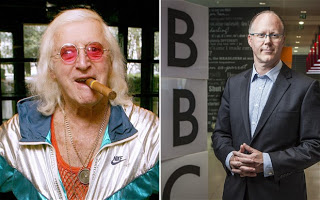 Photograph: Sir Jim Savile on the left and   Mr Entwistle, the new BBC Director general on the right who has to deal with skeletons in the BBC cupboard.

It would appear that BBC covered up child abuse (by Jim Savile and others) within corporation for many years and also obstructed some of the most talented journalists who were exposing it.

BBC executive obstructed more programs by their own staff than the public would ever know. For example, one of the programs obstructed by BBC management in 1999, was the planned TV program about the wearing of religious uniforms by social workers who work in mental health where one would find patients such as those raped by Catholic (and other) clergy. At that time, Director General was of course, a Catholic and so was the British Prime Minister, although secretly. It is as if this lot worked together for their power base in a selfish manner, and not in the interest of public. Dr Helen Bright, Consultant Psychiatrist who exposed the wearing of religious uniforms in mental health to the media in November 1999 was firstly invited by BBC TV and then following BBC management censorship dis-invited. That particular BBC program's makers were disappointed and embarrassed by their own management.

Sexual discrimination against men so prevalent in British culture means that even today men are particularly oppressed when it comes to telling what happened to them. They have to endure painful reminders of the sexual traumas (and lack of treatment). Establishment would do everything they can to cover up the truth. Presumably, many went to religious schools and are a bit awkward about it. Hardly, a child's choice to go to oppressive schools.

Notable exceptions do exist in politics when it comes to issues related to justice and mental health. Apart from PM, David Cameron, another is Rt. Hon. Jack Straw, ex Secretary of State for Justice who wrote an autobiography recently and just how terrified he was when he was approached by a paedophile who wanted to take him to the bushes. He run for his life and manged to escape. But many children did not manage to escape. Some were killed and some killed themselves.

Men always appear to have worse outcomes for suicides than women. There are reasons for that. Men are exposed to significant sexual discrimination in mental health with past collusion of BBC, medical regulators, doctors' union (British Medical Association), Department of Health and medical defense bodies. Repeatedly all have been involved in making life difficult for those who have suffered abuse in childhood. The majority of  those abused by clergy are male children, of course. Girls are evil creatures in most patriarchal religions.

However, there is seductive hold patriarchal religions have on some men and women. Power of association with Godly business meant that victims of abuse have been at mostly ignored, at worse abused further by the system and some converted to drug addicts by their own doctors and psychiatrists through relentless prescribing of benzodiazepines while denied psychotherapy and justice through legal system.

The system also abused journalists who investigated these unpleasant matters and punished doctors who attempted to improve the matters for their mentally ill patients. Medical regulator, The General Medical Council spent an afternoon or two giving pseudo support to child protection by writing some Guidelines while in reality it is still busy looking for ways to do in those who speak up. Thirteen years after the issue of the wearing of religious uniforms has been raised very publicly the medical regulator has firmly decided that keeping eyes closed is pleasant.

Interestingly, GMC's Chief Executive also worked at BBC. The Chairman of BBC Board Lord Patten quite rightly said that there were people who knew about abuse but did nothing about it

When after much pressure on GMC, Head of Empanellment was eventually replaced recently, the new head, (of supposedly independent Medical Practitioners Tribunal) but old pair of hands at GMC, continues with cover ups and refuses to discipline, for example, vexatious doctor who has been a member of Fitness to Practice Panel for years, is a member of Labour Party and supported persecution of professionals (doctors and lawyers) when it personally suited him to cover up his won professional misconduct. It is known that he conducted his private practice using NHS facilities without the permission of NHS management or Secretary of State for Health contrary to UK law. GMC could not care less if a doctor breaks the law as long as he is a member of their own gang. This particular doctor made false allegations against Dr Helen Bright to GMC and against solicitor Yvonne Hossack to Solicitors Regulation Authority. GMC cannot get enough of him. He is such a good executioner who owes GMC his own professional life. So, yes, one can see why GMC enjoys their power over him.

GMC got their panel of inter-faith workers to judge Dr Bright including a Catholic preacher for a span covering at least twelve years.

The head of GMC's information access team refused to disclose under Freedom of Information Act 2000 to Dr Bright who were the members of Preliminary Proceedings Committee who looked at the complaints against her. One was a member of government inter-faith group. Nice one, GMC.

GMC refused to disclose to Dr Helen Bright who are the members of their Ethics and Standards Team. Religious workers could be attracted to regulation of other people's morality and ethics and one can expect them to flock to such committees. They are also likely to avoid dealing with the issues pertinent to good practice of medicine. Hence, GMC's secrecy.

It is  religious bias, and power that comes first and public interest second.


Posted by Doctors4Justice at 08:25 No comments: Links to this post