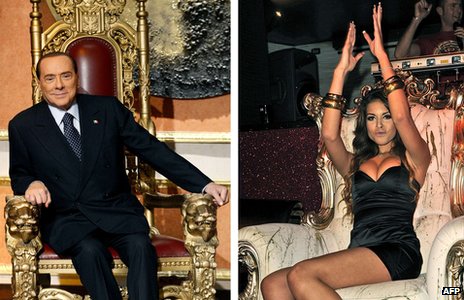 Finally, it took women to do what men would not, but could. Ex-Prime Minister Silvio Berlusconi, a lawyer by training, has been sentenced to seven years in jail, for using services of alleged underage prostitute (photographed on his right above), something both denied, and for the abuse of public office (special favours to her to get her out of trouble for something like stealing).
Berlusconi tarnished the image of Italy which has been saved by a woman judge, Guilia Turri, in what has been hailed as new age of feminism in Italy.
Many men must have joined the feminist movement too recently, sick and tired of their ex-Prime Minister's undignified conduct judging by the celebrations following the judgement. Health Secretary, Jeremy Hunt has said that the CQC (Care Quality Commission) was "fundamentally flawed" when it was set up four years ago and there should be "very, very serious consequences" for anyone found guilty of a cover-up.

Now, of course, there are denials that there have been cover ups. Instead it was stated by ex staff of CQC that a report needed more work. This is in contrast to a statement made by Grant Thornton who wrote a report on a hospital where there was excess deaths of children.

We have noticed that some commissions appear to lack professional independence in some of their staff members and there could be a variety of causes for it, one being that it attracts security - of - job- fond bureaucrats.

No lassaire fair management from Jeremy Hunt then which is the right thing to do.
Posted by Doctors4Justice at 06:09 No comments: Links to this post