Judge Murphy and the veil 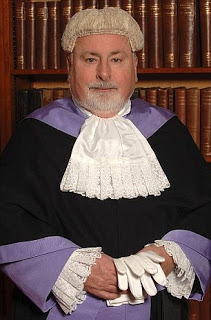 Recently, Judge Murphy in London had difficulty with a witness who covered her face with a veil on religious grounds. This posed a problem of identification but also a problem in the exercise of the professional duty as a judge. It is an accepted legal practice that facial expressions, tone of voice and mannerism of witnesses do matter in courts.

If he allowed witness to be screened from public view while without veil then he risks public hearing not being what many may expect it to be. Public present in court would want to see the witness too. It is not mere curiosity. Public also look at facial expressions, mannerisms, listen to tone of voice of witnesses. Similarly, those judging them are observed. How can one judge a judge's decision making or questioning when one does not really know what behaviour of witness he/she may be reacting to?

This mess can be solved politically, but UK is unlike France which published secular charter in all schools and is a secular state.

Judges have suffered in other European countries too, for example, an Italian judge Luigi Tosti in his attempt to remove cricifix from the courtroom.

Posted by Doctors4Justice at 07:46 No comments: Links to this post

http://epetitions.direct.gov.uk/petitions/54034DOCTORS4JUSTICE: Foreign doctors and language skills
Posted by Doctors4Justice at 01:41 3 comments: Links to this post

The situation in the UK (United Kingdom) is not good. More than 100 doctors died while investigated by the General Medical Council (GMC), the regulator of medical profession. Tens of thousands of patients died in NHS (National Health Service) hospitals unnecessarily and yet there are many regulators in healthcare.

For some time GMC expressed their view that they need new legislation to allow them to test foreign medical graduates' language skills. The facts are that such legislation is not required. European countries ask foreign graduates to provide certificates of proficiency in the language. Germany does and so do other European countries.

Is there such a thing as Cambridge University in the UK? Do they know about English Proficiency teaching and certification? Of course, of course, but power games and manipulation has been the problem in regulation of medical profession for some time.

Posted by Doctors4Justice at 01:14 No comments: Links to this post

Hunt stands up for equality Rt. Hon. Health Secretary Jeremy Hunt has made a stand for equality by raising questions about CPS decision not to prosecute two doctors found to be performing abortions based on sex only which is illegal. Telegraph carried out investigations. It is not clear why CPS considered it not to be in the public interest to prosecute.

GMC does not always prosecute doctors who break the law, and allows corrupted individuals, for example, to remain on the medical register.

Since 2004 over 100 doctors died while investigated by the General Medical Council. The reasons remain unclear and D4J is asking for confidential enquiry why this happened.

Posted by Doctors4Justice at 01:17 No comments: Links to this post

Stop the badger cull or Stop the doctor "cull"

Posted by Doctors4Justice at 12:20 No comments: Links to this post