Oh, well. It would not be news for many who knew of corruption at the EU Commission:
https://www.theguardian.com/business/2016/sep/21/ex-eu-commissioner-neelie-kroes-failed-to-declare-directorship-of-offshore-firm

The failure to declare directorship of the company mirrors UK regulator's failure to hold doctors responsible when they fail to declare relevant directorships or committee memberships. No, there is no competition anywhere on incompetence and wilful blindness.

International Consortium of Investigative Journalism has performed a major operation in publishing names of almost two hundred thousand Bahamas based companies with directorships from politicians all over the world in some of those companies. While Consortium claims the company membership is legal and in some cases justified needless to say, questions will be asked by many.

To search data base by the name of person click on the link below:
https://www.icij.org/blog/2016/09/icij-publishes-leaked-bahamas-info-offshore-database


Posted by Doctors4Justice at 02:45 No comments: Links to this post

Burkini is offensive to men There has been a wave of provocations all over the world by, so called, religious clothes. Muslim women burkini wearers in the photo above in south of France are one of the examples.

Politicians have expressed their outrage in some parts of the world while in others exactly the opposite happened. For example, in United Kingdom police were expected to protect and defend the indefensible - not the first, or the last time for poor British police. Police were sent to guard burkini wearers sampling cold North Irish sea: 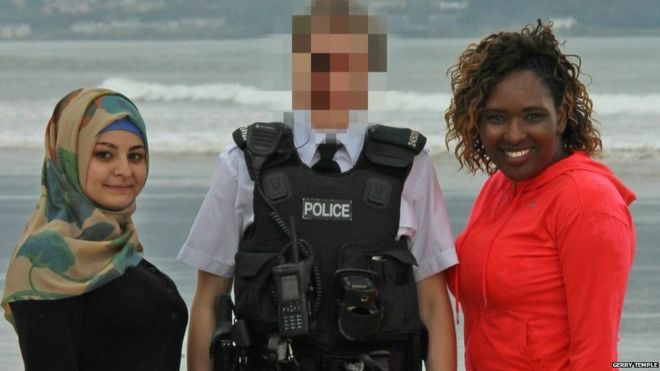 while French police had the opposite task to remove them from the beach: Burkini is an outfit for women to wear at the beach, or for swimming. It is ugly, uncomfortable and anything but modest as proclaimed by some as the reason for its creation.

Burkini is about some kind of moral superiority of modesty. Except, that it is unacceptable as such. If you are modest you do not go to the world to boast about it. Also as you can see from the photographs the burkini does show the body shape. It draws attention.

While feminist politicians are right that  burkini is expression of women's oppression there is also another element, offensive message to men:  beasts who cannot control themselves. The facts are that billions of men do control themselves.

Physical attacks are now occurring in Europe by Muslim gangs on men, women and children. Gang of women attacked a French woman sunbathing in her bikini in a French park. Adults and children were attacked in a nudist swimming pool by a gang of men in Germany. Many German women were sexually harassed by groups of men.

Fashion changed over time for men and women. Sometimes severe punishments were used on men for wearing the different cut of suit or even colour of civilian dress. Women were attacked too for ridiculous exposure of arm, ankle etc. Oppression of non Muslim origin is old, sometimes no longer existing. However, there are Christian sects which also have strict rules for their people: Amish, for example.

Violence can arise out of denied feelings of inferiority. Many people would look down on migrants, or with suspicion as if to say: they came here for the better life, we are superior. The actual circumstances of immigrants vary and while there may be those who came for improved material standard of living there is a denial of cultural values society aspires to such as equality of opportunity for both sexes and freedom of expression which is non abusive in nature.

There are some immigrants who are reluctant immigrants. They never wanted to live in a foreign country. Their dependency on new country can be hostile and destructive.

Among the reluctant immigrants there are those who adapt very well and make great contribution to culture without any wish to be enslaved (or to enslave others) by religious dogma or religious dress.
Posted by Doctors4Justice at 09:06 No comments: Links to this post