CHARLIE HEBDO and deaths due to religious extremism - Many lessons to learn but who is willing?


The security services would, by now, have an excellent idea of what makes an extremist. They would have had the help of their intelligence officers, police, psychiatrists, psychologists, forensic sociologists and others but I do not know if they have all the help they need to be able to prevent more murders/deaths.

Intelligence services need assistance of their political masters, sometimes. Political base is missing in many countries because of: the unwillingness to assess the threat properly (no, they are not all holding guns), unwillingness to contain the serious threat (long imprisonments where necessary), various prejudices, interests, wider implications for the political system as a whole and perhaps, the need for the personal development within the political elite as much as the general population where superstition and belief in supernatural is still present in many people (both within organized religions and outside it).

People die due to religious extremism all over the world and all of the time. It is not usually reported in the media when mentally ill patients die when religious extremism is favored by the state such as it happens in UK. Sometimes media report the relevant issues, repeatedly, without any provocation of the readers and responsibly but governments do just nothing for many, many years. For example, in UK there has been an excess of suicides following the wearing of religious uniforms by mental health workers. The Royal College of Psychiatrists in London pretends to this day that they can do nothing about it despite the fact that it advises the government, has constitution that allows it to communicate with anyone in any institution in order to improve the mental health of the patients and indeed, it is the duty that it does so. But the Royal College of Psychiatrists members prefer to drink tea while chatting nicely to the religious extremists they have in their various influential committees. It is known that Ethics Committees can act like honey to the bees for the religious psychiatrists and that leadership of the college has been weak for many years.

Not surprisingly, taking into account that the education of most doctors (and other population members) is defective from early school days when it comes to the issues of responsibility, The General Medical Council, the regulator of medical profession has employed religious fanatics to work in their fitness to practice committees and they have been effective in removing good doctors leading to more patients' deaths. UK has a shortage of doctors. In addition, the regulator having condemned some good doctors does not have the sense of responsibility to admit mistakes and recommend measures that would protect patients and good doctors. When some people in other countries hear just how many people work in NHS already they asked: "Are people in England very sick to need so many to take care of them?" The answers to that are known already.

Many UK doctors killed themselves while investigated by the General Medical Council, and there has been no independent investigation into those deaths. The General Medical Council did commission their own report. Reading the report one gets the impression of the lack of creativity, subservience to the paymaster (GMC), with no evidence of awareness of the social, economic and political factors relevant to the persecution of some doctors and not others. Closed minds all around. One of the recent recommendations is that doctors should be trained to be more resilient. A bit like a slave master telling slaves to work harder, longer and be happy about the circumstances of their life. There is only so much humiliation and hardship that any human being can bear. The brutality of the GMC regime has to be witnessed to be believed. The GMC's fondness of the religion has been evident with their demands for doctors to be struck off medical register because they offended the religious. For their purposes, GMC would carefully select their barristers, for example, one married to the vicar (likely to be very religious too). The same person then gets promoted to be a judge even though they demanded a doctor who never harmed anyone to be removed from the register. The fury of GMC's religious investigators has no boundaries and has been helped by the head of fitness to practise empanellment who selected the panellists so that GMC would get the result they want i.e. remove those who seem uncooperative to them or dissident. Doctors4Justice has been informed that one of their barristers is siting comfortably at her judicial bench in Kent, England having served the religious agenda of the previous Labour government sincerely so.

Doctors desperate for good psychiatric help often cannot get it. What can the rest of the population expect? Some of the psychiatric reports written for the General Medical Council about the investigated doctors are of such a low standard that it brings into question what do GMC lawyers know about expert evidence rules for the courts and why have those reports not been sent back to the writers as not compliant with the law of expert evidence, at least? Just putting more money to solve the problem, really is not enough. As they say, money is not everything.

Charlie Hebdo assassins' personality developments are yet to be fully known. However, we all know that it is not necessary to be a Muslim, or even religious to be aggressive or violent. Your best friends or family with whom you normally have good relations can turn against you particularly when they do not want to admit something to themselves about themselves. Taking responsibility for own feelings, actions and beliefs is not present to a sufficient degree in those who victimize others. Their early life (or/and later life events) may have been characterised by emotional deprivation, abuse and a sense of hopelessness and helplessness developed out of it. Out of despair desperate measures follow such as terror of others where personal fears of offenders infect others in the society.

Religion can be used in a manipulative way for the emotional aim of achieving the sense of power and sense of social association with nothing else  other than omnipotence and omniscience of supernatural. Religion can be used to glue people into identity group and group is stronger than an individual at times. Thus, from loneliness and despair of powerlessness victim rises to be a member of what is perceived as a larger and more powerful group i.e. that of the chosen religion.

As denial is the common psychological defence from the intrusive unhappy feelings but is not 100% effective some victims help themselves with abuse of alcohol, drugs, sex, religion, over work and  compulsive behaviours to do with excessive dieting, or exercise in order to feel better. All of us have seen it and so many times but how many have set time aside to think about it?

What is the cure? Installing the sense of hope is the first step. There must be a better psychological/social provision for child care that goes a bit longer into adolescence.

What is taking responsibility for own feelings? Responsibility is defined as the ability to respond. It varies in human beings for a variety of reasons: some people are limited by physical/ structural or biochemical  abnormalities in the brain itself. Others have faulty learning and some have mixture of both. If one is feeling that the sun is burning on one's skin most of us would take some evasive/protective action. In other situation different type of action is required. If one has bacterial infection one would aim to kill those bacteria. The assassins in the case of Charlie Hebdo killed what they may have perceived as the cause of their unhappiness but which was likely to have many causes unrelated to Charlie Hebdo.

In general terms, taking responsibility for one's actions would mean correcting what can be corrected if the previous action was wrong, compensating those one has harmed and other measures may be appropriate in some cases from the individual such as forgiving oneself in order to prevent further self and social harm.

Taking responsibility for own belief means being honest, and analytical. When one finds that one has been wrong in one's belief it is reasonable to change that belief even if others may disapprove of it. Those who may feel badly about themselves (poor self-esteem) are less likely to question their belief.  It is like admitting that one is even worse than what one felt anyway. The violent clinging to the belief system can result.

Non-vigilant population allows dangerous political developments for themselves (in UK all the time).

However, sometimes one only has to be free, or happy in order to be hated. Some miserable people are intolerant of happiness in others and willfully blind to the price at which freedom came.

The next edition of Charlie Hebdo comes out next week. Tearful survivor, a well known doctor and journalist Dr Patrick Peloux from Charlie Hebdo told French TV that he could not help the shot colleagues as so many were already dead. Not easy for a doctor or any person, but especially a doctor. Watch here in French


Posted by Doctors4Justice at 06:56 No comments: Links to this post 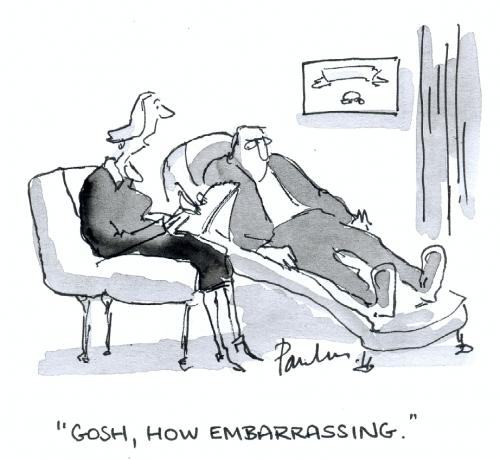 (National Health Service) if, for example, they questioned bad medical, nursing, management or political practise, or if practitioners just, simply, excelled in their work. NHS is a very large and very busy employer with direct links to the regulators so, dissenting voices, or unwelcome competitors can be silenced for ever. If not immediately then over a period of years sometimes lasting 15 years or more of continuous harassment through the regulators.

Now, once again, one presumes, prior to the next election NHS has been used to point the waiting times in Accident and Emergency Departments and therefore, "crises" in NHS is created. The hope one presumes is that the voters would go back to the previously elected party.

UK has many doctors and nurses who are unemployed and who have been educated for many years at  the great public and private expense. This is not a secret.

The government has not rehabilitated the whistle-blowers who having harmed not a single person have been allowed to suffer decades of public humiliations, financial disasters and much more hardship.

The regulators pretend they are helpless and unable to speak up about their errors even when they know them only too well. Where is their insight into their mistakes?

Yet, regulators have condemned professionals for their lack of insight (to insinuate mental derangement of any kind) when whistle-blowers point with the great insight what has gone wrong and what will go wrong in the future.

When overwhelming evidence was presented that future loss of life will happen the regulators have continued to pretend that there is nothing they can do to the present day. Self-regulation does not work. There are very good doctors and nurses in UK who also do not work and meanwhile people suffer harm.

Yes, more people will die because public quite simply allow it.