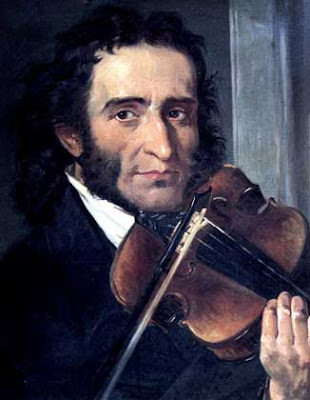 There is much written about Niccolo Paganini.

He remains in our minds not just as one of the greatest musicians but as a rebel and a great person who very generously financed talent like Beethoven. Catholic church did not like him and he was regarded as a heretic. The fact that he had talent was seen as evidence of demonic possession!

Not surprisingly at all, political and social reports now bear his name like this one on Participation, Governance and Institutional Innovation.

Great people in medicine and science continue to experience obstruction from the religious lot sitting at the ethics committees deciding to give permission for the research to go ahead or not. We are so fed up with them.

Main-belt Asteroid System was named Paganini by Russian scientists who discovered it. I love their sense of humor. Most asteroids move in orbits that are somewhat more inclined and eccentric than those of major planets (Pluto is an exception here). Asteroids have to move at the ideal speed not to be thrown out of orbit. If the asteroid is hit by a great force (e.g. by another object traveling through space) it may lose its orbit, and hit planet Earth. Thus an eccentric object, if upset, can destroy dinosaurs as it happened on planet Earth.

We are aware of many outdated practices in political life and in public institutions and hence this article about Paganini.

Enjoy this Paganini Violin Sonata No6 by Mark Naksam